The Firefox Nightly Version Coexists Perfectly with the Eventual Others Firefox Installations, this Meaning that an Unique Firefox Base Environment will be Shared between All the Firefox Versions on the System.

More than this once installed it will Plug-In the Firefox Nightly Channel and so will follow to be Automatically Updated.

With Firefox Nightly you can get a sneak peek at the next generation Web Browser, and help Mozilla to make the best Browser it can be.

Especially relevant: Nightly is an Unstable Testing and Development Platform.

The Firefox Nightly Version can Coexist with the Others Firefox Versions without Troubles, this Mean that Once Fired Up it Will Just Load the Default Firefox Environment.

More than this Once Installed it Will Plug-In the Firefox Nightly Channel and Follow Automatically to be Updated to New Beta Releases.

So to make easier the Visualization of the whole process the Guide includes the essential Screenshots.

Inside you find also detailed instructions about How to Create a Launcher for the Firefox Nightly Browser on Ubuntu Desktop. 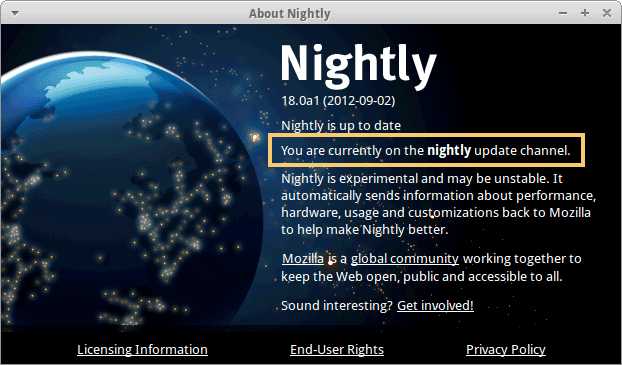 How to Install Google-Chrome Web Browser on Ubuntu: